Franchising is a very strong sector of the Australian economy.

The sectors stability over recent years has been excellent. Set out here are the key facts about franchising, established by Griffith University on behalf of the Franchise Council of Australia in their 2016 survey. 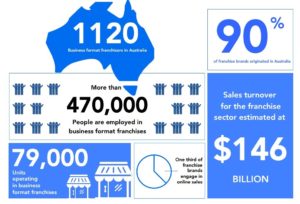 Business confidence has been a significant issue affecting the economy over the past two years. Retail sales have remained relatively flat with the prices of many consumer goods decreasing due to intense price competition and pressure on margins. These trends are reflected in the franchise sector with retail brands, in particular, finding economic conditions challenging. However, despite these constraints, franchise brands have grown internally leading to increases in employment and sales turnover across the sector.

The data provided in this report provides a reliable source of information about the Australian franchise sector. I am very pleased to recommend the Franchising Australia 2016 survey results to franchise sector stakeholders. The series has produced Australia’s only longitudinal data on the franchise sector over the past 18 years. Griffith University is pleased to collaborate with the peak body of franchise representation, the Franchise Council of Australia, in this important research..”

In Spring 2012 international consulting firm PWC released its fourth study of the Australian franchise sector. “Our 2012 publication focuses on 2012 operating results and forecasts for the next three years. This varies from previous years where we have surveyed based on a broader set of topics. This year we have been mindful of the competing pressures on franchisors’ time, hence our decision to just provide the sector with timely information on current year performance and growth targets.

Last year franchisors, like many economists, thought the economy would finally recover from the effects of the Global Financial Crisis. But as we have now seen, it has been an extremely hard year for all in business with the European crisis having a dramatic impact on the world economy; and both business and consumer sentiment.

Despite this, franchisors have achieved ten per cent revenue and profit growth, compared with the CPI movement over the year of 1.2 per cent. Revenue growth of 10 per cent was very close to forecasts for 2012; although profit has been substantially below the 17 per cent anticipated at the commencement of the 2012 financial year.

Smaller franchisors have achieved higher growth rates than their larger counterparts (a function of having a lower base), and it is interesting to see non-retailers outperform retailers with 14 per cent revenue growth.

We would have expected that non-retailers, which include many home and personal services businesses would underperform, as consumers continue to cut back on discretionary expenditure. Likewise, we were uncertain how retail franchisors would fare, given the mixed reports on performance that we have been hearing, and media reports of most retailers claiming a reduction in like-for-like store performance. The result was impressive nine per cent revenue growth and ten per cent profit growth for retail franchisors.

Contrary to expectations, the survey tells us that franchises saw an increase or maintenance of customer counts or enquiries; and also spend per customer. The result for customer count and enquiry is due to good franchisor strategic planning, in particular brand marketing and positioning. The result for customer spend indicates that franchisees were focussed on up-selling and customer service and is evidence that franchisees generally try harder than employees in converting a potential customer to a sale and also selling additional products or products with more features.

Franchisors are certainly buoyed by their success during the last three years and are forecasting double digit growth in revenue and profit for each of the next three years. However, it is interesting to note that their forecasts are slightly less than they were anticipating in 2011, no doubt due to the re-calibration that has occurred in most business owner’s minds as a result of the GFC.

The key challenge and opportunity for franchisors continues to be finding suitable franchisees. However, it is clear that franchisors who are achieving growth are capitalising on this opportunity with the average growth rate in the number of franchised units at 18 per cent. This rate of growth is quite remarkable when you consider the uncertainty in the economy. It is no doubt due to the recruitment strategies employed by franchisors and a desire of potential franchisees to join these successful businesses. However, it may also be reflective of the good work that has been started by the Franchise Council of Australia in promoting franchising through the establishment of the Franchisee Success Club; and the large number of business closures and announcements of retrenchments in the general economy over the past 12 months – many of them in white collar areas – which may have increased the potential pool of suitable franchisee candidates as it did in the early 1990s.

The results of the most recent quality research into the franchise sector comes from the 2015 Franchise Sector Indicator from IBISWorld.  “The Franchising industry is projected to post annualised growth of 2.8% over the five years through 2015-16. During the early part of the five-year period, instability in global financial markets led to a slowdown across the domestic market and mounting uncertainty regarding the stability of the economy, influencing the industry’s performance. A recovery in economic conditions over the second half of the five-year period returned the industry to growth and enabled operators to recover earlier losses.”

Ibis Business Information has also predicted franchising will account for a staggering 60% of GDP in the late 21st century.

It is more a question of when good independent businesses becomes a franchise not if it will become one if it is to grow into the dominant player in your industry.

Franchising of a business generally has a positive impact on a business for the following reasons: